Covering up on the beach 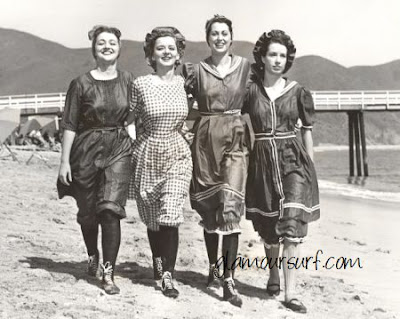 I was recently reminded of a media story concerning a young Australian woman who flew half way around the world to sit on a French beach wearing her Burka. The recollection happened whilst I was walking past Bondi Beach in Sydney where there was not a Burka in sight!


Aside from the reason for her international actions - which I am neither privy to or in a position to pass judgment on - I do admire her for "Covering Up" under the blue skies of a Mediterranean beach. I would however, challenge her choice of colour, black not being my first choice for a covering. In fact I suspect that she must have been gently simmering under the French sunshine. But if you go back several decades when Roman Catholic Nuns had no choice but to wear similar gear whilst administering to souls throughout the Australian outback. Not that wearing black was a health risk per se, just hellishly hot! Those Catholic Sisters actually succumbed to a more insidious killer that still remains a deadly scourge in many parts of the world - Typhoid!


Summer is almost upon us here in the southern hemisphere and we do need to re-visit the annual alarm over the devastation power of sunshine - not only in the form of Global Warming - but also upon our human skin!


Even if you have the "best" skin in the world when you're young, believe me, it will get old and you won't appreciate what the sun did to it in those earlier decades. THE SUN IS INCREDIBLY POWERFUL. It's the equivalent of thousands of Thermo-Nuclear reactions occurring every minute which are pumping out radiation that will destroy anything that falls into it's gravitational field of influence. Thankfully the Earth is in the Goldilocks position - not too close to fry to a cinder, and not too distant to freeze into an ice-block.


But just because the Earth "got lucky", doesn't mean that rubbing sun screen on your skin will protect you 100% against the sun's rays. It's like believing that airbags will save you in a high speed accident. They might reduce the harm, but 100%????


Avoiding direct exposure to the suns rays when they are most powerful is the best option. Don't expose yourself to the sun for more than a few minutes at a time between the hours of 10am and 4pm. If you do then make sure you're fully covered up with appropriate clothing (preferably not black), use high protection sunblock on any exposed areas, wear a broad rimmed hat and UV protection sunglasses.

Ampersands & angle brackets need to be encoded.Follow @DrDJsScript
Posted by Unknown at 8:13 AM