Whilst we were away on our fantastic trip to France earlier this year I had a dream and in it I  dreamed about my father: why I do not know. In the dream he was caught up in some celebrations/party and was pushed, causing him to fall down several steps and I watched helpless from afar. My brother appeared and as we walked along I burst into tears: “Why are you crying” he said? I was unsure at first and then I realized that I wanted to be there for my father in his final suffering and be a gentle presence to him: and I grieved for not being able to do that.

I dreamed that dream in January and he came to stay with us for 10 days in March and then we went to stay with him in Ireland in June for another 10 days. We returned to Oz in July and Dad died very unexpectedly in September: it was only when I reviewed my journal of our French sojourn that I remembered my dream and was able to reflect on how that "Dream" had panned out.

I was thinking about that as I read an article on dreams and was intrigued to learn that although we know a great deal more about sleep and what happens to our brains when we dream, what dreams "are" still remains largely a mystery. The best that I could discern from the article was:


And that's just about it! Apart from that, when we close our eyes we enter into the world of the unknown: but it is a familiar world and it is our world. When I discussed this article with others we all agreed that we should keep a dream journal and try and capture some of the "magic" that happens during the 30% of our lives when we sleep. When I think of the dream that I had about my Dad, it makes me feel very happy.

Perhaps I won't unlock any secrets from future dreams, but I think that there is a possibility that some of them will surprise, renew and be creative forces for good in my waking life.

Getting to grips with Constipation

When I was a lad growing up in the UK, each day after breakfast- like clockwork - Dad got up from the table with daily newspaper in hand and disappeared into the toilet .... for at least 20 minutes! And wherever he went in the world, the routine was exactly the same which cannot be said of about 15% of the western world who struggle with constipation and may visit the smallest room perhaps less than 3 times per week!

Constipation is a big problem and a big strain on those who suffer from it - if you'll excuse the pun! One of the problems when talking about constipation though is to determine exactly what the problem is because one patients story may not correspond with another Doctors diagnosis! Is it difficulty passing a motion? Is having to strain to pass a motion? Is it the size or consistency of the stool? Well the correct answer is "yes ... and no.." as there is no one definition of constipation, but the experts have come up with a delightful compromise with the Rome III Consensus which is states that:
"Symptoms should include ≥ 2 of the following during at least 25% of defecations":
but even using this chart, patients ideas of constipation will often differ from their treating physicians in 50% of cases!

But forming and passing a bowel motion doesn't just rely on the proximity of a newspaper and a suitable "drop-off" point!  In fact the mechanism of defaecation is still to be fully elucidated because it's a very complex process. As well as having two types of squeezing mechanisms within the colon - one for gentle mixing of the contents and the other which is much stronger to propel the motion towards the outside world - these contractions need to be coordinated so that the bowel "behind" squeezes whilst the bowel "in front" relaxes. This is all under the influence of nerves, neuro-transmitters and various hormones, and any interference in either one or some of these can lead to reduced bowel activity and hence constipation.

When it comes to diagnosing constipation, the history is useful especially when it come to medications as certain drugs are renowned for causing constipation - codeine, certain blood pressure medications called Calcium Channel Blockers and some anti-depressants - but history is only a guide, so the experts have come up with some really Hi tech and Low tech investigations which help work out the why's and the wherefores. They will also flash out what is know in their trade as the "Bristol Stool Chart" (which I won't publish here to save the blushes of those of a tender disposition) which is a pictorial depiction of various species of Stool!

When it come to treatment there are some new medications entering the "market" and which seem to be a big step forward in managing this dispiriting condition and that's great news. Old fashioned things such as Prunes do work: soluble fibre such as psyllium does work although Bran doesn't: exercise is definitely a great idea not only for bowels but for general health too - so keep moving to keep moving -: and laxatives that contain Polyethylene Glycol PEG are also effective.

But like all things medical, if you've had a constipation problem for more than 3 months you must see your Doc first before starting to self medicate - especially if you're over 40 or have a strong family history of bowel cancer when you should see your Doc at the first sign of any change in your bowel habit.
image

Ampersands & angle brackets need to be encoded.Follow @DrDJsScript
Posted by Unknown at 11:01 AM 1 comments

You learn something new every day! For instance, I never realized that Tomato(e) plants are related to the Nightshade plant - that of the deadly nightshade variety! But of course, "our" tomatoes don't poison us, in fact quite the opposite according to much medical research.

In years past tomatoes were thought to protect aging men from the risks of prostate cancer: sadly, this did not survive the rigors of further scientific testing and has been quietly dropped from health recommendations. Now, however, Finnish researchers have published a paper which hails the benefit of the trusty tomato - we'll drop the "e" for the benefit of our US cousins - thanks to the presence within it's lustrous red skin of Lycopene which may reduce the risk of Strokes in men. So whilst it may not benefit the contents of your pelvis, it may bolster the health of your brain!

"The results support the recommendation that people get more than 5 servings of fruits and vegetables a day, which would likely lead to a major reduction in the number of strokes worldwide, according to previous research. This may decrease costs of health care in public health," Dr. Karpp, from the Institute of Public Health and Clinical Nutrition, University of Eastern Finland in Kuopio stated. "Lycopene reduces inflammation, inhibits cholesterol synthesis, improves immune function, and prevents platelet aggregation and thrombosis and thereby may decrease the risk of stroke," he added.

So to all those down in the southern part of the globe, start planting some Tomato plants and plan to feast on them during the long summer months - there's a host of ways to do that: fresh, in salads, sun-dried, reduced to make pasta sauces - so get the recipe books out. And for our northern family, although home grown Tomatoes have better taste and flavour, there's still great benefit in the ones in the Supermarkets and even the tinned ones are packed with powerful Lycopenes.

Virus zaps bugs that cause "zits" 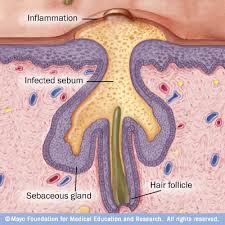 Acne can be the scourge of the teenage years! At this critical time of life when hormones are erupting, the brain is scrambling to make those key emotional connections, all of a sudden the skin seems to erupt and scream "look how crazy I am on the outside too"! And it's not just one or two teenagers who suffer from this untimely embarrassment of spotty skin, it happens to millions of them every year.

Unfortunately, medical science has been fairly static in it's method of managing this distressing condition - not that there isn't something to offer. The standard treatment will involve lotions to clean the skin and unplug the pores, and antibiotics to reduce the surface population of causative bacteria. In females, appropriate usage of hormone contraceptive pills can have a big impact and for the most recalcitrant types there is always Roaccutane - but that's a "heavy" medicine and not without potentially serious side effects.

So when something new for the treatment of Acne comes on the radar, it should make us sit up and take notice for the better all round health of our children and grandchildren.

Researchers at UCLA and the University of Pittsburg have recently shown that the bacteria that are involved in the Acne process have their very own natural enemy in the form a a family of viruses. Propionibacterium acnes, or P Acnes to its friends, is thought to play a role in the inflammation process that leads to the angry, red "zits" that populate the teenage face when they suffer from acne. But P Acne is also susceptible to a harmless virus that lives on our skin and which invades the bacterial cell forcing it to produce more virus particles until it bursts. The hope is that if this virus can be harnessed, then one key element of the acne process may be eradicated and the impact of the condition greatly reduced. The good news is that the virus is specific for P Acnes and does not affect the other billions of bacteria that call our body home.

Like all research, when you answer one question then more appear! If the virus is present on healthy skin, then why do people get acne in the first place? The scientists are cautiously optimistic that they can answer some of these questions, but like all good basic research it does move slowly and there's still a long way to go before they can even think of trying a treatment on humans. But it's a promising lead for a condition that affects millions around the world and causes enormous "heartache" to our young people at a vulnerable time in their lives.